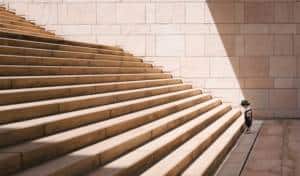 I doubt if there is a human being who has not felt like they hit a wall at some point in their life. It’s really not something we discuss much with each other.

A wall may be an unexpected accident or a life-threatening illness. It may be an emotional breakdown. It could be a financial disaster or a shattering divorce. At the time we feel that there is no solution, no way out of the situation, no way out of the pain or grief. But eventually we find ourselves on the other side of that wall, often feeling even lighter and happier than before.

We never saw that wall ahead before we slammed into it. When we hit it, we either tried to plow through it with brute force, tried to jump over (transcend) it, or we may have dug under it only to find ourselves in the dark night of the soul for a while. If we are lucky, we have friends and loved ones, a community, standing on the other side to pull us into the sunshine.

Some walls, like a sudden injury or accident or the loss of a loved one, cannot be prevented. Some walls, such as a health crisis or an unwanted relationship breakup, perhaps can be prevented with care and attention. Diseases such as cancer and dementia are thought to take years to develop. More and more information is emerging about how we can prevent many such chronic diseases through lifestyle change. Relationship or marriage counseling has saved numerous couples who cared about one another but could not resolve their differences without help.

This past year I have attended a couple of qi gong workshops that got me to thinking about hitting and making it through these walls. The first one I attended was in North Carolina during a time when I had relapsed with a respiratory virus for the the second time. I was sure I had pneumonia and had decided I should not try to make the trip. I let the workshop leaders know. But somehow I managed to make it. It was like something pushed me to get on the plane and got me to my hotel room. I told the workshop leaders I was feeling very ill and might be staying in my room quite a bit. Again I found myself putting one foot in front of the other. Step by step, I somehow made it through the first day. I felt better the following morning. By the time I left the following day I no longer felt ill. In fact, I felt better than I had in some months! I have not relapsed since.

During the next workshop I observed a man in his 80’s work very hard to keep up with the exercises. I watched him walk through his own walls of self-doubt due to his age. By the end of the weekend he had a lot more confidence. He was standing up straighter and walking faster and steadier.

There was also a middle aged man who was experiencing quite a bit of back pain. He was an athlete and used to a great deal of exercise. He had injured his back. By the end of the first day he looked really angry and like he was in a lot of pain. The teacher talked about how we would hit our walls and that we could get through them. I was not sure this man would return the following day. But he did. By the end of the workshop he admitted that he came close to quitting and just going home, but that his pain was much better. He too was standing much straighter. He said he was glad he had come and stayed.

This is what I have learned about walls so far:

When we are injured, one of our survival mechanisms is to shut down awareness to the injury. Athletes seem to be particularly good at this. They can somehow shut down the communication from an injured knee or shoulder to their brain, and they can continue to compete. A child who grows up in a neglectful, unloving, or even violent home learns to tuck away their fear and pain into the deep recesses of their unconscious.

Eventually though, these injuries tend to surface both physically and emotionally. Around mid-life the athlete begins to have problems with that body part such as arthritis and/or pain. The children who have grown up find themselves having difficulty maintaining a healthy and nurturing relationship. It’s like they have put a shirt over their childhood wounds. In the closeness of the relationship the wounds get touched, and it’s easy to think that it is the other person is who is causing them.

The walls get hit. The numbness is gone and there may be considerable pain. But the blessing is that there is a chance to have feeling again. The parts that have been locked out can now come alive again. If we can embrace that wall, we can embrace those parts of ourselves that had been locked away. When we can avoid hitting our walls, prevention is the best way to go for sure. But if we hit them, we can get through them. On the other side is the sunshine of wisdom, gratitude, and compassion for ourselves and others.

in chronic pain or illness, dark night of the soul, hitting a wall
Share: